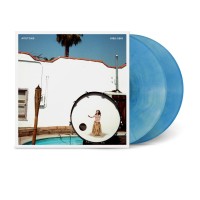 Counting their early years in the scuzz-rock band Spinout, whose sole self-titled release came out in 1991 on Delicious Vinyl, guitarist Mark Lightcap, bassist Richie Lee, and drummer Steve Hadley played together for a total of 15 years. They disbanded in July 2001, when Lee committed suicide in the garage next to the house where the trio practiced. Afterwards, Rolling Stone ran a short obituary saying Acetone’s albums were “well received” but “failed to make any waves.” It was the first and only time they were featured in the national music press.

Between 1993 and 2001 the trio released two LPs and an EP on Vernon Yard—a Virgin subsidiary—and two LPs on Vapor, the L.A.-based label founded by Neil Young and manager Elliott Roberts. In that span, they were selected to tour with Oasis, Mazzy Star, The Verve, and Spiritualized. Against a rising tide of post-Nirvana grunge and slipshod indie rock, Acetone tapped into a timeless Southern California groove by fusing elements of psychedelia, surf, and country.

They rehearsed endlessly in an empty bedroom in northeast Los Angeles, recording hours of music onto cassettes that were subsequently stuffed into shoeboxes and left in a shed behind the drummer’s house. Those tapes are being released for the first time in this anthology, which also includes highlights from Acetone’s official releases. Taken together, the songs form a companion soundtrack to Sam Sweet’s book, which maps the character of Los Angeles as a place through the lens of these three unique characters bonded by music.

“I think our music is all about moods and feeling but hopefully it will get as weird as it possibly can,” said Richie Lee in 1997. “We want things to get weird in the way that you could hear an Acetone song and know that no one else in the world could make that kind of music but us.”

“Acetone are one of my all time favorite bands. Their music is still as electrifying and beautiful now as it was back then.” – Hope Sandoval (Mazzy Star)

“A lovely mix of what would it be like if Dick Dale and Neil Young played with Isaac Hayes and The Velvet Underground. A seminal American band.” – Richard Ashcroft (The Verve).