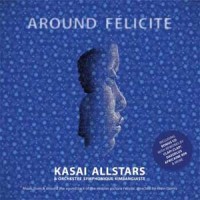 Crammed Discs presents the soundtrack album of Alain Gomis’ film Félicité (Silver Bear Grand Jury Prize at the 2017 Berlin Film Festival), performed by the inspiration of the movie, the Congolese collective the Kasai Allstars. Includes bonus remixes from the likes of Clap! Clap!, Daedelus and Africaine 808.

Deeply impressed by the music of Kasai Allstars, French-Senegalese director Alain Gomis drew inspiration from their music, and from the voice and character of their singer Muambuyi to write and direct his new fiction movie, entitled 'Félicité'. The film's eponymous protagonist is a proud, free-willed woman who sets out on a breakneck race through the streets of electric Kinshasa to save her son. Her profession: singer with the Kasai Allstars!

The band wrote and performed most of the soundtrack, and appears onscreen playing their own part. Muambuyi's voice is omnipresent, and is being heard every time Félicité (played by Congolese actress Vero Tshanda) sings in the bars of Kinshasa, backed by Kasai Allstars.

The 'Around Félicité' album includes the film's main pieces, performed by Kasai Allstars and by the Kinshasa Symphonic Orchestra (who specially arranged three works by Estonian composer Arvo Pärt), alongside new tracks by Kasai Allstars, as well as interludes consisting of fragments of dialogues and sound bites taken from the soundtrack.

'Around Félicité' comes with a companion piece: 'Félicité Remixes', a collection of ten remixes of Kasai Allstars tracks by electronic music producers from Europe, North America and Africa, including reworks by Clap! Clap!, Daedelus and Africaine 808. 'Félicité Remixes' is available as a bonus disc included in the CD version of the album, as well as a separate digital album available on all streaming and download platforms.

'Around Félicité' also comes out as a vinyl double-LP including the album plus five of the remixes.

**Exclusive To The CD Version