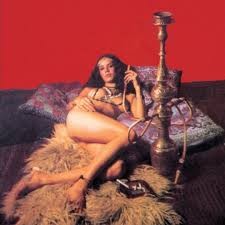 Vinyl of this reissue went out of stock within 6 months of its re-release in 2012,, so now, in the Month of its 21st Anniversary (it was indeed, released in the midst of Britplop in April 1996), the band have repressed it on blue vinyl for RSD. In an attempt to keep it in print and not see it go for £50+ on nefarious auctioneering sites. Fresh cut by Shawn Joseph, incredible art redux from Johnny O, and with MP3 DL code / FLAC DL code. "Relaxing With?" is the first Heads album, its reissue, remastered and boosted with extras has been a long time coming: Rooster is mightily proud to announce its release at last.. The Heads had self-released a couple of 7"', and then Cargo Uk's inhouse label Headhunter UK got to release a further 7", and then the Debut album in 1996. Amidst a world suffocating in Britpop smarm, the Heads cut a timely swathe with their unkempt rock psychedelique. The album contained 10 tracks of guitar driven, amp destroying rock, with cues taken straight from the US underground, Stooges, MC5, Mudhoney, Pussy Galore, early Monster Magnet too but with a disitinctly British stamp, some of the drone and fuzz from Loop / Spacemen 3, some of the attitude of the Fall, Pink Fairies and Walking Seeds and overlaid with the spaced rock of early Hawkwind. It was obvious that the four members of the Heads were music obsessives. The debut album was recorded at Foel studios (owned by Dave Anderson from Hawkwind) and engineered by Corin Dingley, it was mastered by John Dent at LOUD. For this reissue, the album was remastered by Shawn Joseph, Theres the full 2CD complement on the DL codes / this time theres a FLAC version too.. A release that confirms the Heads status as " a national treasure".