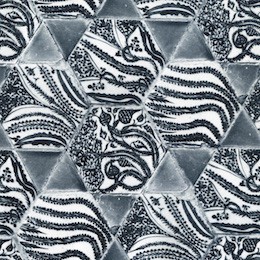 Kassem Mosse - purveyor of fierce, radically strange and thoroughly uncompromising frequencies and rhythms, always looking into new directions to take electronic music. On this outing, out of his current home at Honest Jon's, we get lush drum machine nocturnes, gnarly electronica and glorious flowerings of zoned-out dubspace. Whether prepared solo, or jointly with his partner in crime, Mix Mup; a Kassem Mosse recording is less of a stand-alone creation than the next thrilling installment of an unstoppable groove. True to form, "Disclosure" dazzlingly extends some of the most mystical, dancefloor-rooted music of the last decade. From dusty, dream-state techno on Workshop and Mikrodisko, to frazzled beatdowns on Trilogy Tapes and Nonplus. Pedigree techno and house are the lifeblood of "Disclosure", yet with something newly microscopic about them. Its mesmerizing juggle of pointillist percussion, melting-wax chords and fleshy bump’n’grind suggests biological processes at work, as if Mosse has zoomed right into the cellular metabolism ticking away at the core of the music. These textures are woven into some of KM’s richest and most emotionally complex material so far, constantly enlivened by forays into jazz, dub and beyond. Check the farty-bottom, broken-down, steel-pan minimalism of "Collapsing Dual Core", just the job for cruising around Detroit in a car at night; and "Phoenicia Wireless"' dastardly, intricate combination of glowering John Carpenter synths, heavy static and junked consoles on remote, as if the beats are fighting a wave of dirt, soot and fossilization. The frantic, interstellar tarantella of "Galaxy Series 7"; the wonky bump-and-hustle and heavy-lidded drama of "Purple Graphene", to close, are all signposts on Mosse's natural journey through sound.
Expertly pieced-together and paced, "Disclosure" brilliantly registers all the self-contained coherence and artistic authority of an album proper, yet shadowed throughout by the open-ended and questing spirit so vital to Mosse’s music. Its intimate enactments of non-closure, and its sense that anything could happen at any moment; its thematic play between excess and incompleteness, babble and tongue-tied stutter, grooving and entropy, wobble and the pause-button leave the listener both fully invigorated yet gagging for more.