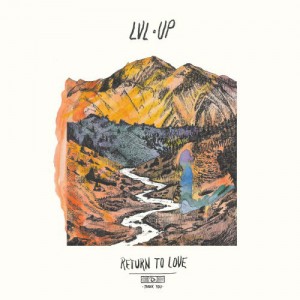 ‘Hidden Driver’, the opening track of LVL UP’s third album and Sub Pop debut ‘Return To Love’, never stops moving. What starts with unassuming guitars and vocals adds new lines, depths and intensity, until its unrestrained, triumphant finish. “God is peeking, softly speaking,” repeats the chorus, working through the relationship between spirituality and creative inspiration and introducing a band that is always pushing further.

LVL UP - guitarists Mike Caridi and Dave Benton, bassist Nick Corbo and drummer Greg Rutkin - are a true collaboration, a band that takes the stylistically distinct ideas of four members and brings them together into something new. Caridi, Benton and Corbo write and sing equally, bringing their work to the group to be fully realized, resulting in an album built on different perspectives but a common drive. “We have very different inspirations across the board,” says Benton, noting his own admiration for the writer and documentarian Astra Taylor, Corbo’s interest in the mystical and the occult and Caridi’s attention to personal storytelling. The music itself grows from a shared melodic and experimental sensibility, as well as a nod to iconic influences like Neutral Milk Hotel and Mount Eerie.

LVL UP were formed in 2011 at SUNY Purchase as a recording project between Caridi, Benton and their friend Ben Smith, with the original intention of releasing a split cassette with Corbo’s then-solo material. They instead released that album, ‘Space Brothers’, as one band and Rutkin joined shortly afterwards for the group’s first show. Smith left the band for personal reasons just before the release of second album, ‘Hoodwink’d’, a joint release on Caridi and Benton’s labels Double Double Whammy and Exploding In Sound. Double Double Whammy also put out records from other artists in the tight-knit community that launched the band.

Also part of that university community was ‘Return To Love’s producer Mike Ditrio, who mixed LVL UP’s previous records and “was basically a fifth member of the band,” says Corbo. “He played a huge role in developing the sound, without butting in too much. He also navigated our personal dynamic really nicely.”

MothersWhen You Walk A Long Distance You Are Tired