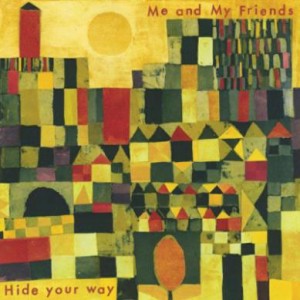 The sound of English folk colliding head-on with the golden-era music of 1970s West Africa and the West Indies.

Second album from British quintet Me and My Friends. Towering vocal harmonies, soaring cello and clarinet lines, colossal basslines and drum patterns combine on an exquisite rollercoaster-ride of the emotions from euphoria to melancholia and back again.

Bound by a mutual love of the sun-drenched vintage sounds of afrobeat, soukous, highlife and roots reggae, the UK-based five-piece re-invent these influences around the instantly recognisable voice and finger-style guitar of songwriter and singer Nick Rasle. The band's sound involves a meeting of diverse musical backgrounds: Fred Harper's gospel-influenced drumming and James Grunwell's deep basslines provide the bed for Sam Murray's growling clarinet tone and Emma Coleman's strident cello and flawless ear for vocal harmony. 'Hide Your Way' sees the band embarking on a deeper exploration of the playfulness and rhythmic agility which has come to define their sound. A rich and varied pool of musical ideas sits alongside a plaintive lyricism, as the songs tell tales of regret, corruption, loss and deceit. The result is something fresh and original, marrying the emotional vocal power of folk music with early jazz and delta-blues singing and the driving rhythms of West-Africa's golden era and the heart and soul of the great roots-reggae songwriters.