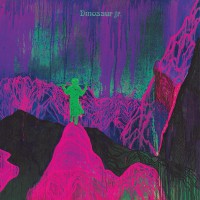 PICCADILLY EXCLUSIVE: PRE-ORDER THE ALBUM AND ENTER A DRAW TO WIN A 100cmx100cm PROMOTIONAL FABRIC DISPLAY BANNER – ONLY 1 IN THE WORLD!!!

With all the insanity that is stalking the Earth in 2016, it’s nice to have something to rely on. Who’d’ve dared to think it’d be Dinosaur Jr.? There’s no doubt about it - this is the record that the fans have been waiting for since the original line up reformed.

The songs on ‘Give A Glimpse Of What Yer Not’ were recorded over the past year or so, again at Amherst’s Bisquiteen Studio (located in a secret nook of J’s basement). The sound is great and roaring with J’s various bleeding ear psychedelic guitar touches oozing their way into the smudge-pop modelling, while Murph’s drums pound like Fred Flintstone’s feet and Lou’s bass weaves back and forth between proggy melodicism and post-core thug-hunch.

Barry says: As you would expect from Dinosaur Jr, this is an anthemic grunge tour-de force. Hard-hitting drums and distortion abound all topped with Mascis' snarling but perfectly tuned vocals. Rousing chord progressions are rife here, but not the only thing on offer,'Be A Part' shows a bit of single-note twiddling before breaking out into a melancholic minor-key chord fare. 'Knocked Around' could be the soundtrack to a particularly heartwrenching college-party romantic failure montage. A brilliant return to form for Dinosaur Jr, as exciting, dynamic and emotive as ever. Highly recommended.