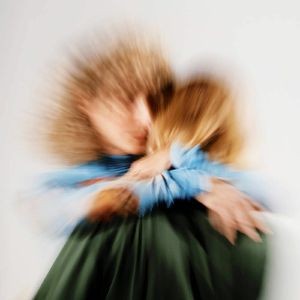 "I begin our sixth album by exploring melodies that take me to the boundaries of my voice. I write myself into my highest highs and lowest lows. There is a precariousness in the outer limits of my range that demands vulnerability. As our demos take shape, I realize this will be our first album without any belting, the first time I can’t force my way through the notes," recalls Tennis' Alania Moore. "In the studio, Patrick compresses the shit out of my mic and I sing with the gentleness of breathing. In that softness, lyrics take shape. We want to write a big album—something suited for radio, but our songs don’t follow conventional pop structures. Instead of choruses with universal themes, I write with a specificity that is new to me, narrowing in on the smallest details of our lives. The more we try to broaden our scope, the more we turn inward." "We name the album Pollen. It is about small things with big consequences: a particle, a moment, a choice. It is me in a fragile state; sometimes inhabited freely, sometimes reacted against. It is striving to remain in a moment without slipping into dread. It is about the way I can be undone by a very small thing." Tennis is Alaina Moore and Patrick Riley. Pollen is their sixth album. The two met in the philosophy department at the University of Colorado in 2008 after dropping out of their respective music programs. In the years after graduating, they got involved in Denver’s DIY music scene. Through house shows, they were connected with Underwater Peoples and Firetalk. The band went blog-viral nearly overnight, landing them a record deal with Fat Possum and then Communion Records, but with shifting labels and new interests, Tennis chose an alternate path for their band and career. In 2016, Moore and Riley formed the label Mutually Detrimental and began self-releasing. Their newfound freedom allowed them to return to their sailboat to write their next full-length, this time in the Sea of Cortez. Yours Conditionally, released in 2017, became their most commercially successful album–charting at #4 on Billboard’s Independent list and in the top 100 highest selling vinyl releases that year. They played Coachella and opened for artists like The National, Father John Misty and The Shins–proving their DIY roots as a cornerstone to their sound and narrative. Their follow up Swimmer (2020), was recorded in their home studio with Moore and Riley producing and engineering. The pair brought their long-time touring member Steve Voss in for the second time to drum on record. The singles, Need Your Love and Runner, were Tennis’ most successful releases to date.