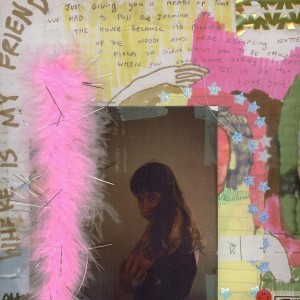 I Was Trying to Describe You to Someone’s eight songs meld elements of shoegaze, grunge, indie pop & southern American culture into a uniquely personal style of modern rock music that resonates with power & tenderness. The ever-darkening & deepening of Wednesdays’ sound on I Was Trying to Describe You to Someone owes a debt of influence to The Swirlies, Arthur Russell, Red House Painters, Tenniscoats, Ana Roxanne, Acetone, & their continued collaboration with MJ Lenderman (who lends backing vocals to the songs “Billboard” & “November”).

I Was Trying to Describe You to Someone was recorded at Hartzman’s home with engineering assistance from her roommate Colin Miller. The depth & clarity of the recordings balance the distorted volume of Wednesday’s live performances with the intimacy of Hartzman’s voice. Her words hold the center of the chaos, unobscured by the power of the band. Hartzman describes her lyrics as “attempts to access old personal memories & do them justice through prose, with inspiration from the writings of Richard Brautigan, Flannery O’Connor, David Berman & Tom Robbins, & movies like Steel Magnolias.”