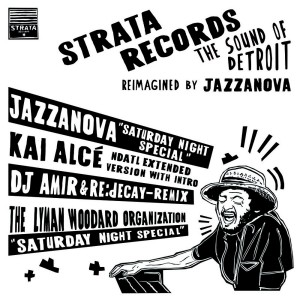 The second single to be pulled from upcoming BBE album ‘Strata Records – The Sound of Detroit – Reimagined By Jazzanova’, ‘Saturday Night Special’ features remixes by Kai Alcé and DJ Amir & Re.decay, as well as The Lyman Woodard Organization’s 1975 original. Possibly the best-known piece of music from the Strata label’s diverse and innovative catalogue, the unique, low-fi, moody, understated aesthetic of ‘Saturday Night Special’ has captured the hearts of music fans and DJs worldwide. “When I first heard the Lyman Woodard Organization ’Saturday Night Special’,” says DJ Amir, “I thought it was a song from a Blaxploitation soundtrack. Once I realized that Lyman was from Detroit, I immediately thought that if there was ever a ’theme song’ for Detroit that ’Saturday Night Special’ would be it. There is such a cinematic vibe to the song full of grit, rawness, and determination that just soaks into your veins. This album/song will always be in my bag of records to survive the apocalypse with!’” When DJ Amir and Jazzanova began work on the ‘Reimagined’ project, breathing new life into the Strata Records archive, this jazz-funk classic was right at the top of the list of ‘musts’ for the band to re-interpret. “I had no idea what direction they were going to go, musically” says Amir. “The original song had been sampled more than a few times, but in my opinion, it was never done tastefully. However, from the first practice session, I knew that they were spot on with the right direction! Their version is the perfect blend of Detroit and Berlin!” Kai Alcé’s ‘NDATL’ remix of ‘Saturday Night Special’ (named, like his label, after his three hometowns of New York, Detroit, ATLanta) brings a sure-footed lightness to Jazzanova’s version of the song, making the absolute most of the track’s stellar horn solos. “After hearing the unreleased Kamasi Washington/Gregory Porter remixes he did, I knew I had to reach out Kai” says Amir. “With this remix, he stretches out the track into a seven minute groove, in the direction of a soulful house/future jazz interpretation.” Alongside his Berlin production partners, Re.decay DJ Amir turns in a low-slung rework of ‘Saturday Night Special’, using as many parts from the Jazzanova version as possible. “We tried to emulate the intro to one of my favourite jazz dance tracks, ‘Expansions’ by Lonnie Liston Smith” says Amir. Mission accomplished.