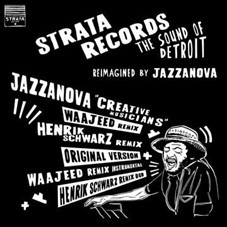 12” release of The Lyman Woodard Organisation-penned 'Creative Musicians', reimagined by Jazzanova and featuring remixes by Waajeed and Henrik Schwarz. Originally released as a digital EP from the album 'Strata Records – The Sound of Detroit – Reimagined by Jazzanova', 'Creative Musicians' and its remixes now come to you on deep grooved vinyl. The vocalist for these sessions is Sean Haefeli, who originally hails from Indianapolis, and brings a relaxed urgency to his contributions, sounding like a young Gil Scott-Heron. Leveraging his 20 plus year friendship with legendary Detroit DJ/Producer extraordinaire, Waajeed, Amir enlists him for a special four-to-the-floor mix that not only keeps that organic vibe but also adds a unique contemporary Detroit flavour! Henrik Schwarz needs little introduction to fans of eclectic electronic sounds. For over thirty years, his amazing body of work has packed dancefloors worldwide. Henrik takes ‘Creative Musicians’ in a slightly different direction, retaining many of Jazzanova’s original elements while adding his signature sound to the mix, providing another dance floor scorcher! And just to give you proper context, we have included the cult-classic, much-loved original version of ‘Creative Musicians’ by the Lyman Woodard Organization. ‘Strata Records - The Sound of Detroit - Reimagined by Jazzanova’ is no ‘covers’ album, rather a brand-new celebration of the iconic imprint, as Jazzanova’s take on Lyman Woodard Organization’s musical manifesto ‘Creative Musicians’ makes clear from its Afrobeat-inspired horn arrangements, drum track, and syncopated tempo.

Matt says: Jazzanova cover of this The Lyman Woodard Organisation classic plus remixes from Waajeed and Henrik Schwarz. Proving to be quite the undertaking this Strata / Jazzanove project. Get stuck in!