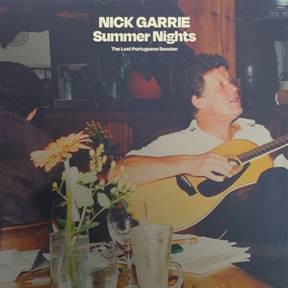 Garrie’s album "The Nightmare Of J.B. Stanislas" became a cult album in the truest sense of the word which has been re-released several times, and rightly so. Gradually, a new generation of music fans and musicians came to appreciate Garrie's work, he was collaborating with the likes of Duglas T. Stewart (BMX Bandits), Norman Blake, Francis McDonald (both Teenage Fanclub) and Gary Olson (The Ladybug Transistor) and releasing critically acclaimed albums in recent years. The latest find from the Nick Garrie cosmos is a session he recorded in Portugal at the beginning of the millennium: "Summer Nights - The Lost Portuguese Session".

Nick GarrieThe Moon And The Village