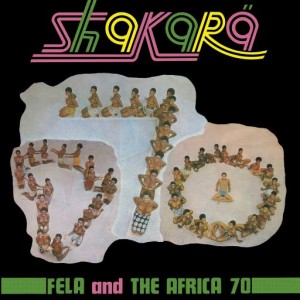 “Shakara” is the 6th in the series of celebratory Fela 50th Anniversary reissues. Like its predecessors in the series, this version will be on colour vinyl and the LP will be wrapped in a gold foil obi strip with a brief essay on the album and Fela's global impact on music. Like Fela's other early 70's releases, he used each side of his LPs to create a deep groove that pulls the listener in and follows with metaphoric lyrics that call out and critique the corrupt hangover of colonialism.

The album is the sound of Afrobeat's maturation as a global music. Fela's Pidgin English lyrics extend his music's audience beyond Yoruba speakers and make his words understandable across the Anglophone world. In "Lady," Fela highlights the adoption of European social habits to the detriment of African culture. "Shakara" is a mainly instrumental track, with a brief lyric, sung in Yoruba, warning against boasters and braggarts. The song pacing is festive and typically up tempo, with boisterous horn arrangements, with strong solos from Fela on keyboards and the fearsome Igo Chico on tenor saxophone.