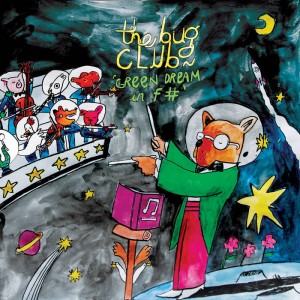 Green Dream in F# is a culmination of The Bug Club universe that has been constructed over the course of two sold out EPs, a couple of standalone singles, and the kind of relentless touring the band has quickly become known for. ‘It’s Art’ is a typically short piece of garage pop perfection, beginning quietly and with singer and guitarist Sam Willmett listing the band’s musical heroes in the manner similar to one of those he namechecks: Jonathan Richman. The band’s ever-present sardonic wit is at the forefront, as they question the meaning and purpose of art - and in turn themselves - before throwing in a blistering guitar riff and the trademark duel-vocals between Sam and Tilly Harris (bass, vocals) before things get too serious.

The band say this first single sets the tone for the album, and musically it presents us with a refined version of what we have come to expect on the basis of previous releases: whip-smart pop songs performed flawlessly and with humour by one of the tightest musical units going. As indicated by the names of both first single and album, The Bug Club’s debut LP shows the band taking a long, hard look at the way the music industry - and by extension the art world - takes itself so seriously, and deciding to ignore that and carry on doing things on their own terms.

Riding atop drummer Dan Matthew’s relentlessly solid foundation, Green Dream in F# packs in 14 tracks covering favourite The Bug Club topics including space, small town life, love and swearing. Sam and Tilly’s playing could be virtuosic if they were in any way arrogant, but they’re not, and so well-crafted and at times complex guitar work sits neatly within the sharp song structures that never stick around too long, and backs engaging and, at times, laugh-out-loud funny lyrical storytelling.

Following the remarkable DIY success of early EPs Launching Moondream One and Pure Particles (also available via Bingo Records), Green Dream in F# shows a band not at all phased by the prospect of putting out their debut full length. Instead, they use the space to stretch their abilities and create something as cohesive, involved and engrossing as you’d expect the imaginary, dog-directed symphony their LP’s name pokes fun at to be.