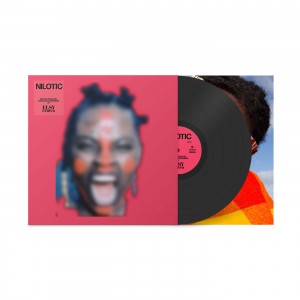 Kenyan born, but now residing in Adelaide, Elsy Wameyo might just be the hottest kid on the block right now. With a fast-flowing, sharp lyrical flow which navigates both classic boom-bap rap and more modern hybrids of trap and grime; immediate comparisons can be drawn with Lil Simz and Nadia Rose; especially with the youthful, conscious, empowered confidence these artists all exude. I guess Wameo's gospel background and firm belief in God's path for her give her lyrics a slightly more spiritual edge but that doesn't stop them being both party-smashing anthems as much as they are a statement of deep intent and social philosophy by an obviously intelligent and informed voice.

A ridiculously strong debut EP, side A begins with the fiery, dominating and controlled aggression of "River Nile" which blends upfront bass and drill patterns to deadly effect. "Promise" is a huge R&B / hip-hop banger, destined for repeated reloads at the best house parties in town before "Sulwe" concludes side A with a jazz-n-bass informed piece of deep introspection that both Giles Peterson and Theo Parrish would both snap up given half a chance.

Before introducing side B with a thick sweltered piece of ambience, "Nilotic" erupts off the record with a vicious intent and highly infectious groove - highlighting injustices and discrimination with a quick-fired, witty delivery that's surely indebted to Nadia Rose, over a kind-of dancehall-pop beat that's impossible to ignore.

"Hunger" finishes off this faultless debut with an anthemic R&B / afrobeats hybrid which has almost Rihanna-esque grandiosity and shows an elegance and ambition in her songwriting that few can match at such an early stage in their career.

Put simply, this is one of the best debut EPs I've heard for a while - a star in the making surely. Get on it!

Matt says: Have you heard me talk about Elsy Wameo yet? No? - then you haven't seen me!! I'm currently waxing lyrical about this new addition to the musical landscape. Like a cross between Nadia Rose and Lil Simz, with plenty of soul in her belly - big things afoot for this lady!

LeftfieldThis Is What We Do