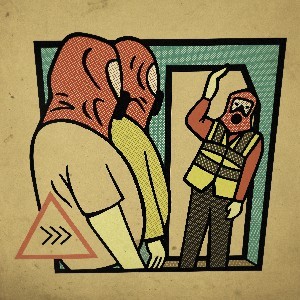 The mighty Beak> – made up of Billy Fuller, Will Young, and Geoff Barrow of that band fame – return with their most claustrophobic album yet, chock full of the krautrock grooves, meandering structures and off-kilter melodies that fans of the band have come to expect from them. Having knocked it out of the park with their ‘Sex Music’ single earlier this year, >>> carries on in the same subtle, bass-led vein.
The trio flirt with chaos throughout the album, pushing each instrument through layers of distortion and reverb to the brink of recognisability, and the countless eerie squeaks, sci-fi synths and fucked-with-strings only add to its otherworldly nature. >>> is as mesmerising as it is uneasy, teetering on a tightrope stretched between soft, winding compositions and edgy, no nonsense heft.
Pretty much every song is a highlight. ‘Birthday Suit’ is devastating, all fluttering synths, lo-fi vocals and heartbreak, while ‘Allé Sauvage’ is a dangerously danceable seven-and-a-half-minuter, with blips galore and razor sharp hi-hats driving the song along nicely. ‘RSI’ is a motoric gem. Scratch that – Beak> are a motoric gem.
But ‘When We Fall’ is on another level entirely. First released under the band’s