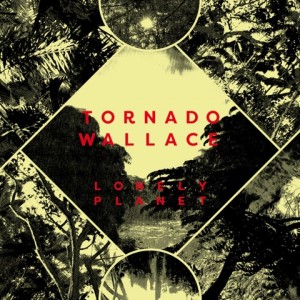 The eye of the storm: welcome to Tornado Wallace's debut album! How about some references? New Age sounds meet new wave melodies, Grace Jones runs into the Dire Straits at Compass Point, while a Korg Mini Pops and a Roland CR78 make amends for Sly & Robbie's absence, Michael Mann pictures Joseph Conrad's 'Heart of Darkness', Robert Rauschenberg tries his luck at naturalism and an imagined Wally Badarou echoes through all of it. The accumulation of about four years of work, with tracks written in Berlin and Melbourne, "Lonely Planet" is nothing like you may have expected from the Australian expat. Merging functionality with a musical playfulness on releases for ESP Institute, Beats in Space and Music From Memory's sister Label Second Circle, Tornado Wallace's found himself as one of the producers behind José Padilla's International Feel album. Here, he leaves the needs of the dance floor behind in order to create a magical mystery tour de trance into his and our inner jungle. Sandwiched between the title track and the yearning beauty of the album's final point "Healing Feeling", you get all of that as well as collaborations with and contributions of NO ZU, David Hischfelder and the voice of Sui Zhen on "Today", who would easily make Anna Domino take her proverbial hat off.
Tornado Wallace created an album that supersedes the requirements and expectations of a debut. Like a lost Island Records or a never released Made to Measure album, "Lonely Planet" soundtracks notions and ideas that recall the nostalgic future in the past as much as it looks ahead.

Patrick says: Comprising of seven expansive compositions, ‘Lonely Planet’ transports the listener to a dreamlike landscape alive with excellent birds, dense foliage and breathtaking vistas. As he glides effortlessly between future primitive visions and otherworldly ambient suites, Wallace marries lush FM synthesis with Knopfleric guitar and organic percussion, grounding us in reality while our eyes dart over the intangible. And there, nestled in the midst of all this utopian beauty is ‘Today’, the greatest 80s pop record that never was. Boasting a blithely shrugged vocal from No Zu’s Sui Zhen, the track sounds like a springtime meeting between Talk Talk and Gina X at a far flung resort. Yet despite its abundance of detached cool, this cinematic gem lends the LP a human touch, allowing the listener to find their place in the natural rhapsody. Clear your schedule, close your eyes and take the trip of a lifetime.