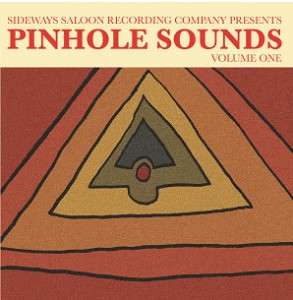 Pinhole Sounds Volume One is the first in a series of compilations on Sideways Saloon and marks the celebration of ten years since The Travelling Band’s formation on a whimsical recording project in Brooklyn, NY in the autumn of 2006. The mini compilation includes as yet unheard tracks from bands on the Sideways Saloon roster, as well as one-off gems from other bands and artists we love. Side A opens with ‘Wasted Eyes’ - the first glimpse of The Travelling Band’s forthcoming new album - a self reflection on the reckless behaviour of the troubled protagonist. It features a wild fuzz that any 70s dad and/or Charles Manson follower would be proud of. It’s followed by a live recording of ‘Borrowed and Blue’ (from The Grand in Clitheroe in May 2015) that conjures the sentimental last shreds of now departed guitarist Steve ‘Mugger’ Mullen, in what was his final show for the band. Side B opens with the killer ‘Mustanging’ from Manchester’s Jo Rose & Pit Pony, weaving literary references through scuzzy guitars and feel good riffs and showing that much like Nashville, there is more to Jo Rose than simply country music.

Sweden based Barbarisms follow up from their highly rated sophomore album ‘Browsers’ with a new dreamy, harmony drenched ear worm ‘The Two Most Boring Things’. Their music was introduced to us by A. Dyjecinski, who closes the EP with what could be the exit music of a yet to be written modern western, with the beautiful ‘The Way of the Buffalo’. I first saw him perform this song a cappella around a campfire at End of the Road festival back in 2009 and from that moment I fell in love with his baritone voice and his ability to write songs that transcend the space between darkness and light. His critically acclaimed 2016 debut LP The Valley of Yessiree is out now on Sideways Saloon. - Jo Dudderidge, September 2016