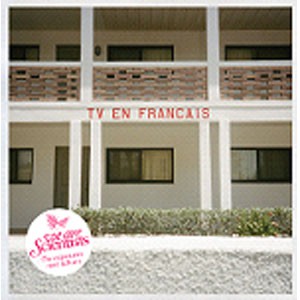 The new long player was recorded in New York City over the last year with producer Chris Coady (Smith Westerns, Beach House, Gang Gang Dance, Blonde Redhead), and lands in the middle of the band’s 5 month tour of Europe, America & Australia. A summer of festivals will follow.

Asked to comment on the unusual title, bassist Chris Cain explains, “It’s in French, I think. At least some of the words.”

Singer and guitarist Keith Murray elaborates: “We wanted to get at the seemingly inevitable parallax that happens between two people in a relationship, that sense that you get the gist of what the other person needs and wants and how they feel about you, but only the gist — you’re relying on these broad cues a lot of the time to tell you what the hell’s going on.”

We Are Scientists exploded onto the U.K. scene with one of 2005’s iconic indie dance rock records, ‘With Love & Squalor’. Years of touring followed, as did a second album, ‘Brain Thrust Mastery’, that spawned now-classic nightlife anthem ‘After Hours’ (a #11 charting single). Main stage slots at Reading & Leeds, Glastonbury, T In The Park, and festivals all over Europe, as well as appearances on Later with Jools Holland, and their own series of comedic MTV shorts (‘Steve Wants His Money’), followed by third album ‘Barbara’… all served to cement and increase their legacy.

Now, after releasing a 7-inch and a 5-song EP in 2013, the band prepare to share their finest collection of songs to date.

According to Cain, “The guy who was producing everything looked different from the one who did those other three records.”

Murray further enthuses, “Yeah, working for the first time with Chris Coady as producer had a huge effect — he has such a distinct and well-developed sense of what’s cool and what sounds good, but he’s also emphatic about keeping the rawness of the performances in there.”

Drummer Andy Burrows, who also recorded ‘Barbara’ with W.A.S., relocated to New York for a year to work on the new album, and lends his world-class efforts behind the kit and elsewhere.