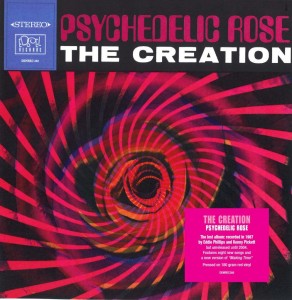 The Creation was formed in 1966 from beat combo The Mark Four, and was quickly signed to a production deal with Shel Talmy, The Who’s producer. The first release was the urgent “Making Time”, which featured guitarist Eddie Phillips playing his guitar with a violin bow, two years before Jimmy Page started doing so.

In January 1985, The Mark Four reformed for a one-off show in Cheshunt, and subsequently Eddie Phillips and original lead vocalist Kenny Pickett reunited to make some new Creation recordings. At the time, only two tracks – “Spirit Called Love” and a new version of “Making Time” – were issued as a single in 1987, before the record label went out of business. These two tracks plus the remainder of the recordings were finally issued as the album “Psychedelic Rose” in 2004.

The CreationHow Does It Feel To Feel