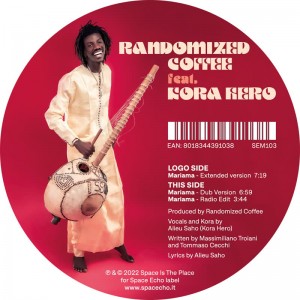 The meeting of Alieu and Randomized Coffee gives light to this new project, in which the Roman duo tackles a production that skillfully links Mediterranean influence to ancestral Africa in a patchwork woven of typical African ethnic elements to those of house and electronica in a "groovy" body that enhances the classical side of the African country in a modern musical mood and rhythm.

The story tells about the day before an arranged marriage ceremony.

Masanneh is a handsome and well-known man in his village of the Mandinka Tribe, born and raised in the village of Kudang, near the river that flows through the entire country; the Gambia. Many in the village believe him to be charismatic and generous, others

believe him to be a venal materialist devoted to money. Masanneh decides to consult Cherno Jallow, a wise Marabout, to figure out how to deal with his future. He therefore moves westward to the village of Bondali, in Foni, where before practicing his work as a skilled trader he talks to Landing Sawo, the district chief, from there he hears the sound of a Kora played by Jali, while across the road he sees a beautiful woman Mariama Gomez passing by.