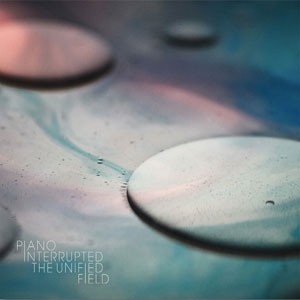 Piano Interrupted is the brainchild of London-based pianist and composer Tom Hodge and French electronic producer Franz Kirmann. Coming from two very different musical worlds (electronica, pop and techno for Franz; classical and minimalism for Tom), the two musicians had been friends for a long time before deciding to make music together. The Unified Field is Piano Interrupted's 2nd album. It was recorded in London in the first half of 2013 and features 10 brand new compositions. Kirmann and Hodge began the recording process on Tom's childhood piano, a Pleyel baby grand complete with its own peculiar characteristics and quirky charm. Recordings of Greg Hall's cello followed, as well as the new addition of Tim Fairhall on double bass. The title of the album comes from David Lynch's book Catching The Big Fish. In the context of his film-making, Lynch explains that if such a field exists then everything within it interconnects in one way or another, so that scenes and elements that may initially seem disconnected from each other emotionally or in terms of meaning, would in fact eventually make sense. This idea seemed particularly fitting in a musical context also, as it neatly captures Piano Interrupted's core music-making methodology; namely to draw upon multiple, varied styles and influences and bring them into one coherent unifying whole.

The Unified Field exhibits many classic Piano Interrupted's traits and tropes, but whereas their debut album Two By Four was all about discovery, the new album is about the deepening musical relationship between Kirmann and Hodge through their continuous exchange of ideas. If Two by Four was an amalgamation album borne of three EPs, then The Unified Field is a much more focused and concise snapshot of Piano Interrupted's approach. The new album simultaneously refers back to the intense intricacy of early EPs whilst building on developments from Piano Interrupted's live explorations and improvisations as well as the extended recording techniques and filmic sound of the Papa Hedi EP. Dense arrangements of fragile piano, colourful cinematic soundscapes, organic rhythmic textures and rich, warm strings provoke a diverse range of emotions. The Unified Field is both a seductive, one-time listening experience and a record to return to again and again to reveal its intricate secrets and subtleties.