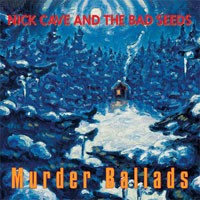 ‘Murder Ballads’ is the ninth studio album by Nick Cave And The Bad Seeds, released in 1996. As the title suggests, the album consists of new and traditional murder ballads, a genre of songs that relays the details of crimes of passion.

‘Where The Wild Roses Grow’ was a hit single and received two ARIA Awards and guest musicians on the album include Kylie Minogue, PJ Harvey and Shane MacGowan.

It was the band’s biggest commercial success to date, most likely helped by the unexpected repeated airplay of the ‘Where The Wild Roses Grow’ video on MTV, who even nominated Cave for their Best Male Artist award of that year, though this nomination was later withdrawn at Cave’s request.

‘Murder Ballads’ received almost unanimous critical praise with Rolling Stone awarding it 4 Stars and Entertainment Weekly rating the album very highly as well. Q magazine had this to say: “...Musically, The Bad Seeds touch on tinkling cabaret jazz, country-paced morbidity and every morose station between” while it ranked Number 7 in the NME's 1996 Critics’ Poll.