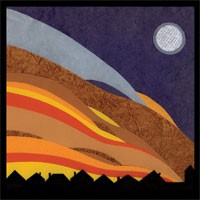 Nancy wrote and recorded almost everything herself over the course of two and half years in her tiny home studio in Manchester. For the first time Nancy used a computer as a compositional tool alongside her idiosyncratic palette of instruments, including a battered piano, guitar, and her own multi-layered vocals. The end result is more ambitious, more focused and more uplifting than anything she’s done before.

While the adventurous sounds she used create a mesmeric physical effect, the emotional purity of the lyrics is just as powerful . First single ‘The Last Battle’ opens the album, a magnificent introduction to its trove of pure musical delights. A soaring, celestial-soprano array, the song recalls Ennio Morricone and Arthur Lee, building to an irresistible climax.

Featuring artwork created by Nancy herself, the album will be available on CD in a gatefold card wallet, and on limited edition vinyl LP (including a CD of the album).