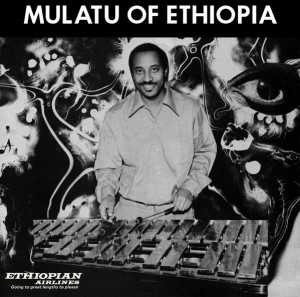 Strut present the official reissue of a landmark album in the field of African music, Mulatu Astatke’s ‘Mulatu Of Ethiopia’ from 1972. Recorded in New York, the album arrived at a time when Astatke had begun to master the delicate fusion of styles needed to create Ethio jazz. “I left the UK for America and studied at Berklee College in Boston. I learnt the technical aspects of jazz and gained a beautiful understanding of many different types of music. That’s where I got my tools. Berklee really shook me up.”

Journeying regularly to the Big Apple to play and watch live shows at the Cheetah, the Palladium and the Village Gate, Astatke met producer Gil Snapper on the circuit. “Gil was a nice and very interesting guy. He produced music and worked with all kinds of musicians.” The meeting would lead to a series of albums on Snapper’s Worthy label, Astatke began to hone his sound, infusing funk and Azmari “chik- chikka” rhythms into the mix. Returning to a downtown Manhattan studio with Snapper and working with some of the city’s top young jazz and latin session players, ‘Mulatu Of Ethiopia’ began to take shape. “We rehearsed for 3-4 weeks,” remembers Astatke. “it took them a while to get the right feeling in the music.”

The resultant album represented the first fully formed document of Astatke’s trademark Ethio jazz sound. It features ‘Kulunmanqueleshi’, ‘Dewel’, and ‘Kasalefku-Hulu’, tracks that Mulatu would return to regularly on singles and in live shows, the Ethio- Latin workout ‘Chifara’ and the self-titled groover ‘Mulatu’ (“I wanted to make a track for.... myself!”).