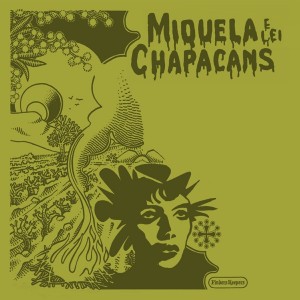 The first progressive girl group of the French Occitan language pop scene bring you folk funk, sun-baked bossa, Coltrane jazz and their own brand of punky ‘Dizco Rural’ against an untouched French Balearic backdrop spanning the late 70s and 80s.

If even the most assiduous of European record collectors consider the Occitan language music scene to be France’s best-kept secret then it’s as fair to say that the incredible multifaceted recordings of langue d’oc prog girl group Lei Chapacans have spent the last four decades hiding in plain sight. In all fairness this overlooked treasure chest of minority language excursions into folk funk, Balearic, bossa, John Coltrane-penned jazz, baroque psych, Palestinian poetry, comedic synth skits (and even the rawest form of femme-fronted multilingual punky disco) has been stowed away in inconspicuous photographic record sleeves, falsely evoking something closer to contemporary C&W while oft-misplaced in record shop cassette racks alongside ‘traditional’ spoken-word and scholastic albums.

So, for the uninitiated, don’t be too hard on yourself. The fun starts here. For those who are familiar with the rare and sought-after one-off solo album by Occitan singer Miquela and have craved for more, then you’ve come to exactly the right place. Lei Chapacans (a name that roughly translates to The Vagabonds) is the all-girl vocal group assembled by Miquela herself just two years after her debut release, having toured the word and snubbed major label record deal offers with a steadfast allegiance to the protection of the Occitan language in which this album is primarily penned and performed (minus a small amount of German and sarcastic English in one rebellious instance).

For European collectors with a penchant for French savoir faire, but have further yearnings for folkloric femme funk, then it’s time to look towards the Occitan sunset where you will meet Lolo, Miquela, Sophie, Irena and Denise.

These amazing, and undeniably culturally important recordings might have taken some time to find a wider audience, but for music lovers, crate diggers and vinyl vultures alike there are still a lot of tasty morsels out there to be scavenged and devoured, ask any self-respecting Chapacan and they’ll concur wholeheartedly.

Maria Teresa LucianiSounds Of The CIty