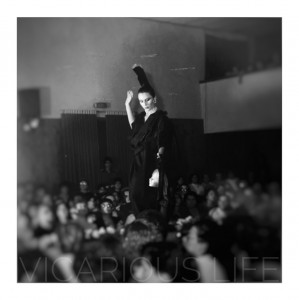 Next up on Polytechnic Youth is the eagerly anticipated new full length from the mighty Le Cliché, the minimal synth project of Limerick born, Spanish based Gerard Ryan. 12 tracks of fabulous classic analogue, mono synth sounds showcasing Ryan’s obsession with minimal, lo-fi electro pop- as do his sleeve notes, which credit vocal samples by cult synth forerunners Boris Dzaneck, The Petticoats and Tara Cross, a collaboration with Ricard Anderson of ‘This is the Bridge’ and liner notes (an essay on vicarious consumption) edited by Danny Bosten of Das Ding.

Kicking off with the album’s title track- which, as a 45 last year attained plays on 6Music, reviews in “Electronic Sound” and “Record Collector” and sold out in a tick (as does all the LC back catalogue). Elsewhere on the record, tips of the hat to early Cabs, Fad Gadget, Transparent Illusion, Neural Circus et al, yet firmly sounding as fresh and current as any new electronica doing the rounds just now, lovely stuff and a superbly free flowing consistent set of tracks. Hugely recommended to anyone into any of the above and destined to sell out super quick….

Barry says: I do love a PY record, almost all of them actually and while this certainly bucks the trend from the airy melodic synth we got from Melodien last month, it's another killer outing. Hypnotic synth stabs and echoic vocals twist around each-other in a high def minimal-wave/acid meltdown. Thoroughly superb, and quintessential PY.