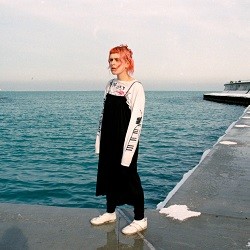 “The Lamb was written during a time of intense paranoia after a home invasion, deaths of loved ones and general violence around me and my friends,” says Lillie West, the Chicago-based songwriter behind Lala Lala. “I began to frequently and vividly imagine the end of the world, eventually becoming too frightened to leave my house. This led me to spend a lot of time examining my relationships and the choices I’d made, often wondering if they were correct and/or kind.”

West initially started Lala Lala as a way to communicate things that she felt she could never say out loud. But on The Lamb, her sophomore LP and debut for Hardly Art, she has found strength in vulnerability. Through bracing hooks and sharp lyrics, the 24-year-old songwriter and guitarist illustrates a nuanced look on her own adulthood -- her fraught insecurity, struggles with addiction, and the loss of several people close to her.

Across the album’s 12 tracks, West carefully examines the skeletons in her closet for the first time, hoping to capture honest snapshots of her past selves. Many of the songs show West asking herself agonizing questions about her life with a clever and hopeful curiosity. On the album’s first single and opening track, “Destroyer,” she reflects on feeling self-destructive and the delayed realization something in the past has irrevocably hurt you. In “Water Over Sex,” West laments her old precarious lifestyle, while trying to readjust to her newfound sobriety, and ”Copycat” confronts her feelings of alienation and boredom. “Some of this album is about being frustrated that everything is always repeating itself and being bored with your own feelings,”she explains. “‘Copycat’ in particular is about how everyone talks exactly the same on the Internet and how it sometimes feels futile to try and be yourself.”