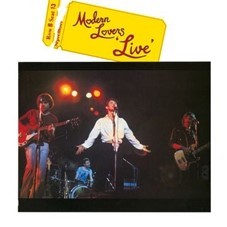 The first live release from the There’s Something About Mary star, recorded at the Hammersmith Odeon Co-Produced by Beserkley Records founder Matthew King Kauffman and pop-legend and Rock ‘n’ Roll Hall Of Famer, Kenny Laguna Available CD & LP, with an exclusive yellow colour variant for Independent Retail While the U.S. might not have caught on to the magic of Jonathan Richman, the U.K. certainly did. Recorded at the Hammersmith Odeon, ‘Live’features Jonathan and the Modern Lovers performing classics from their first two releases to an enthusiastic crowd. (The eight-minute version of “Ice Cream Man” should inform that!) The set includes the recent Top 5 single “Egyptian Reggae,” as well as tracks from the Modern Lovers’ previously releases and new tracks. Captured on tape by Beserkley founder Matthew King Kauffman and Kenny Laguna (whose rock pedigree runs from Buddah Records through Joan Jett’s biggest hits)‘Live’ is a true, time and place document of the magic that is Jonathan Richman. The performer who The Farrelly Brothers chose to include in their classic 1198 film There’s Something About Mary, rather than simple licensing his music. A pivotal release in Richman’s catalog, ‘Live’ spotlights how captivating a performer he was, and continues to be.

PavementWesting (By Musket And Sextant) - 2022 Reissue