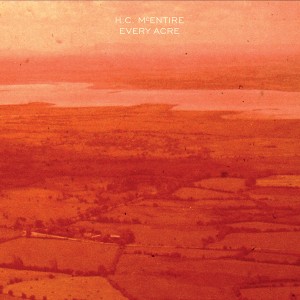 If naming is a form of claiming, of being claimed, how is one tethered to both the physical landscape that surrounds us, as well as our own internal emotional landscape at times calm, at times turbulent, and ever changing? H.C. McEntire’s new album Every Acre grapples with those themes that encompass grief, loss, and links to land and loved ones. And naming claiming land, claiming self, being claimed by ancestry and heritage permeates the hauntingly beautiful landscape that is this poignant collection of songs.

The songs straddle the line between music and poetry. In “New View,” McEntire cites poets “Day, Ada, and Laux, Berry, and Olds” fixtures in the world of writing, whose works are beacons of light over bleak horizons. The beginning of the song is backed by soft guitar plucks that fall on the downbeat and spangle like stars, and, throughout, guitar, bass, and drums swell together gently, mimicking ebbing and flowing tides under the moon. McEntire’s voice (at once tender and fierce) intones the truth of both giving and taking, releasing and claiming: “Bend me, break me, split me right in two. Mend me, make me I’ll take more of you.”

Permeated by heartbeat-like drums, “Shadows” develops quiet ruminations on surrender and loss reminiscing, moving on. This ponderous, dreamlike song asks the question of how “to make room.” How does one make room, for self and for renewal and surrender, when it is so difficult to leave what you know behind? Playing with slivers of descending chromatics, along with the occasional downward-stepping bass, here McEntire yearns for home, and for nesting.

Perhaps one of the more grief-stricken songs, “Rows of Clover” is a lamentation, one that touches on the loss of a “steadfast hound.” The lone piano in the beginning of the song is rhythmically hymn-like. The stark verse arrangement gradually leads to a chorus that reads like a moody exhale, swollen with lush guitar strums and a Bill Withers–esque understated soul groove. But what stands out the most is an image of being “down on your knees, clawing at the garden” the only explicit mention of a person in the song. “It ain’t the easy kind of healing,” sings McEntire, seemingly from further and further away as her voice echoes; and healing ta;kes time, time takes time truths that linger painfully.

“Dovetail” is a song that tells of various women. The song moves back and forth between solo piano and the addition of bass and drums under vocals. McEntire’s gentle, trembling vibrato harmonized in thirds in a celebratory manner calls to mind a rejoicing psalm and shines through these images, leaving the listener cuttingly fraught with emotions such as wonder, sadness, nostalgia that can only arise with these juxtapositions.

Gracious (and graceful) with its lilting melodies and lush harmonies, Every Acre explores the acres of our physical and emotional homes. These songs are reaching for the kind of home that we all seek: one where we can rest and lay down (or tuck away) our burdens of loss. And maybe, moving through every acre of a world that often tries to tear our sense of identity and heritage down, McEntire sheds light on what it is to be human in this life both stingy and gracious, both hurtful and kind.