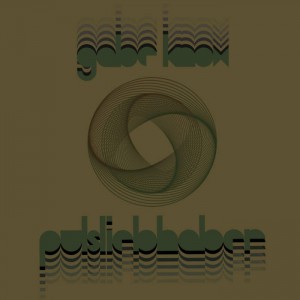 The Gabe Knox side collects a trio of hard-to-find rarities and ‘lost’ gems; kicking off with “Student Disco ‘81”, previously available on a limited Record Store Day 7”, it’s a sickly-sweet Krautrock inflected synthpop confection, with just enough bite to fill the dancefloors of a bygone era. The other two cuts, fan favourite “Carbon Bubble” and the ultra-rare “Cosmic Debris”, which amply showcases Knox’s more expansive, experimental-but-still-melodic side, made available for the first time on vinyl.

On the flip, Mat Handley’s Pulsliebhaber project was an exercise in super-fast recording with as little computer use as possible (for sequencing or processing). Although, as Mat explains :

“my keyboard playing skills are rudimentary (at best), first takes were used just about every time. Each of my seven tracks were written and recorded in a single session with not one of them taking more than a couple of hours to finish, some of them significantly less than 60 minutes. I think the original intention was to record a bunch of tracks and revisit them later, but after sending them to Dom PY it was agreed to release them as they are with just a little sheen provided by Jez Butler’s mastering.

So yes, some of the timings are shaky with the odd bum note here and there, but the process was very refreshing especially after spending five years each on the first two Pulselovers albums. Drums were all provided by Volca Beats and the Volca Kick (with maybe one appearance of the Drum Brute). Synths used were the MFB Dominion X, the Korg MS20 Mini and my trusty old Bass Station 2. Everything was fed through a variety of noisy guitar pedals and recorded either onto tape or directly into Audition, whilst titles were all selected from a half hour spent down a Wikipedia rabbit hole and mean absolutely nothing. Thanks go to Gabe for agreeing to share this piece of plastic with me, to Jez for making my synth noodles (almost) presentable and especially to Dom for his enthusiasm and for giving us all Polytechnic Youth”

Barry says: Two of my favourites here, with Gabe Knox filling his side with typically gorgeous motorik synth fare, while the affable and talented Handley modestly describes his side as quickly pieced together, but the result is both brilliantly evocative and entirely at odds with the rushed creation. A talented duo on another beautiful piece of PY wax.