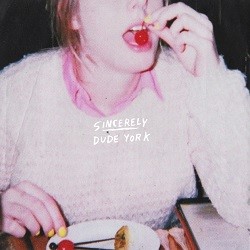 The Seattle-based trio Dude York—Peter Richards on guitar and vocals, Claire England on bass and vocals, and Andrew Hall on drums—is announcing itself with an album that couches its themes of anxiety and eroding mental health in rock tracks that amp up the sweetly melodic crunch of power pop with massive distortion and bashed-to-heck drums.

Sincerely is a loud,sweaty rebuke to those moments in life when it seems like nothing is working, a testament to the power of friendship, staring problems directly in the face, and finding solace in art. Longtime Sleater-Kinney and Bikini Kill producer John Goodmanson and The Blood Brothers’ Cody Votolato helped Dude York craft a more straightforward draft of Sincerely, one based on the energy of their live show but without any superfluous flourishes.

The band’s thoughtful approach to putting together Sincerely's songs echoes the album's overarching themes of almost-punishing inward focus. Bringing England's straightforward drawl into the mix underscores that idea, and its contrast to Richards' excited yelp heightens the tension on Sincerely, a chaotic, yet ultimately triumphant album that's a vital tonic for these increasingly confused times.