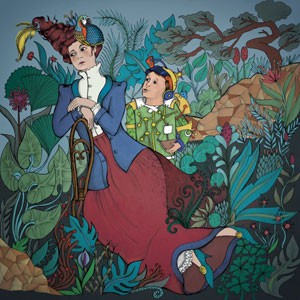 Meridian Brothers are back with a new studio album, the bizarre and wonderful 'Salvadora Robot'. Heading deeper into the tropical rhythms of Latin America and the Caribbean each song on the album focuses on a different style and playfully twists it into Meridian Brothers's surreal landscape.

Originally formed in 1998 it was the previous album 'Deseperanza' that brought Álvarez's Meridian Brothers to the attention of the wider world. Released worldwide in 2012, the album's unique aesthetic and freaked-out blend of Latin rhythms and psychedelic grooves won him new fans the world over. DJ and tastemaker Gilles Peterson selected 'Guaracha UFO (No Estamos Solos...)' as his favourite track of 2012.

'Deseperanza' focussed heavily on salsa rhythms but on his new release Álvarez based each track in a different Latin American style. For example 'Somos los Residentes' finds it inspiration in Dominican Republic merengue while 'Baile ultimo....' is a slow and sad reggaeton. The lyrics talk of a man who has been sent to the electric chair because he was dancing too much reggaeton, a style that isn't accepted as "good taste" within Colombia.