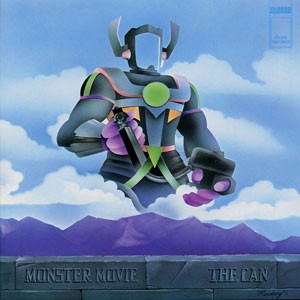 Monster Movie is the debut album of Can, recorded and released in 1969. The use of improvisation, experimentation, editing and layering of sounds set a standard for Can's subsequent albums in the early 1970s, which were seminal to the freewheeling avant-garde style dubbed "krautrock" by the British music press.

The album is credited to "The Can", a name suggested by vocalist Malcolm Mooney and adopted by democratic vote. Previously the band had been known as "Inner Space", which later became the name of their purpose-built recording studio. Some copies of the LP bore the subtitle "Made in a castle with better equipment", referring to Schloss Nörvenich, the 14th-century castle in North Rhine-Westphalia where the band recorded from 1968-69.

The 20-minute jam "Yoo Doo Right" was pared down from 6 hours' taping, while the lyrics of "Mary, Mary So Contrary" riff off of Mary, Mary, Quite Contrary, a popular English nursery rhyme.

Monster Movie was the only Can album on which Malcolm Mooney performed all of the vocals until Rite Time, 20 years after.