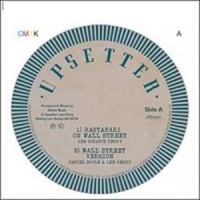 ‘Rastafari on wall street’ features a heavy weight sound system style cuts of a deep roots rhythm from ‘’Back on the controls’’ A title track with Lee Perrys political and conscious lyrics about rastafari and a takeover of the Wall Street system, followed by a heavy Dub version mixed by Daniel Boyle, the co-producer of ‘’Back on the controls’’ and Lee Perry on the Dubbing and effects. This is a sublime and vintage style Dub cut that uses rare and vintage equipment to create the mix.

Side two sees veteran reggae vocalist Danny Red echoing Lee’s conscious message with a solid vocal cut called ‘’I’m Willing’’ A sound system scorcher that has been tested to full effect on ‘Young Warriors’ – (the son of Jah Shaka) sound system. To back this version up, the 4th and final cut on the 12” Features a haunting Flute cut dubbed again by Daniel and Lee in full Analogue style.