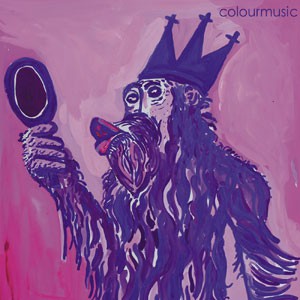 In keeping with their single minded voyaging between disparate sonic realms, Colourmusic’s greatest influence has always been their own intuition. Take new album ‘May You Marry Rich’, released via Memphis Industries. Described by co-founder, vocalist and guitarist Ryan Hendrix as their “purple album”, it’s an album that takes the four piece’s previous full length, 2011’s ‘My ___ Is Pink’, as a starting point and expands upon it in different and unusual directions.

Formed in Oklahoma in 2005 with British-born Nick Turner, some years after bonding over Aphex Twin during their university days together, Colourmusic expanded to include bassist Colin Fleishacker and drummer Nicholas Ley.

With two previous albums under their belts, ‘F, Monday, Orange, February, Venus, Lunatic, 1 Or 13’ and ‘My ___ Is Pink’, the group have gained a justified reputation for marrying hallucinatory textures and experimental rock tropes with an offkilter take on the world. Anything from writing songs based on Newton’s theory of colour, to songs written at the tempo that people have sex have been explored during their nine years together.

‘May You Marry Rich’ is a darker affair, with its twelve sprawling tracks obsessing over mankind’s seemingly insatiable lust for pure happiness. “It’s about having the option to have anything you want, like a king, and asking whether that would make you happy,” Hendrix explains. “It’s about happiness and a theory that we’re not wired to have contentment as our genetic disposition.”

‘May You Marry Rich’ is a powerhouse of a record, a towering inferno of ideas. “But we’re not pounding these themes into people’s heads,” Hendrix says. “They’re more prompts, to give you a sense and the flavours of what we’re exploring.”