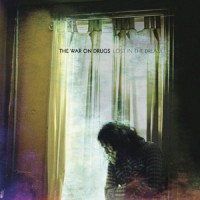 Lost In The Dream is the third album by Philadelphia band The War On Drugs, but in many ways, it feels like the first. Around the release of the 2011 breakthrough Slave Ambient, Adam Granduciel spent the bulk of two years on the road, touring through progressively larger rock clubs, festival stages and late-night television slots. As these dozen songs shifted and grew beyond what they'd been in the studio, The War on Drugs became a bona fide rock 'n' roll band.

That essence drives Lost In The Dream, a 10-song set produced by Granduciel and longtime engineer Jeff Zeigler. In the past, Granduciel built the core of songs largely by himself. But these tunes were played and recorded by the group that had solidified so much on the road: Dave Hartley, (his favorite bassist in the world), who had played a bit on The War on Drugs' 2008 debut Wagonwheel Blues, and pianist Robbie Bennett, a multi-instrumentalist who contributed to Slave Ambient. This unit spent eight months bouncing between a half-dozen different studios that stretched from the mountains of North Carolina to the boroughs of New York City. Only then did Granduciel--the proudly self-professed gearhead, and unrepentant perfectionist--add and subtract, invite guests and retrofit pieces. He sculpted these songs into a musical rescue mission, through and then beyond personal despair and anxiety. Lost In The Dream represents the trials of the trip and the triumphs of its destination.

"I wanted there to be a singular voice, but I wanted it to be a project of great friends. Everyone in the band cares about it so much," he says. "That is the crux of it--growing up, dealing with life, having close friends, helping each other get by. That is what the record's all about."

As such, these tunes reveal a careful and thrilling reinvention of the sound that's become The War on Drugs' trademark. The signature meld of long tones and scattershot layers still stands, with phantom drum machines and organ lines dotting the musical middle distance all across Lost In The Dream. Note the way the keys whisper against the guitar's growl as the tempestuous "An Ocean in Between the Waves" approaches pentecostal heat. Hear how, when a sharp and hard riff cuts into the inescapable chorus of "Red Eyes," synthetic strings and baritone saxophone shape a soft, infinite bed beneath it.

But there's a newfound directness to these tunes, too. Granduciel's voice steps out from behind its typical web of effects--louder now, with more experiences to share and more steel from having survived them. He sounds less like a prismatic reflection of a rock bandleader, more like the emboldened actualization of that idea. With its crisp, unencumbered delivery, "Eyes to the Wind" becomes the album's centerpiece and the group's new anthem. This is Granduciel's to-date triumph and the exact moment where Lost In The Dream moves from a tale of confusion to one of resolve. Throughout most of the record, grips loosen and senses fail, memories are mourned and expectations are abandoned. But after the Rolling Thunder lift of "Eyes to the Wind," Granduciel finds new contentment and direction. Anguish sublimates into deliverance. Backed by his bros, Granduciel becomes a preacher in a new pulpit.

Sil says: This one polarised the shop a bit. Hesitant in the beginning, it ended up growing on me and I consider it now an outstanding album and one that I keep coming back to. Easy to like with its references to Bruce Springteen, Tom Petty or Bob Dylan, it is an album that is not risky. It is not groundbreaking but it is pleasant and gentle. As Andy wrote long ago now... 'There is a mellow weightlessness to the sound which contrasts beautifully with the driving heart of the songs. They're sad songs, but never sorry for themselves. This is cathartic, redemptive, expansive music, still in love with life and in awe of the possibilities.' So there it is, if you do not have it, get it.

The War On DrugsSlave Ambient