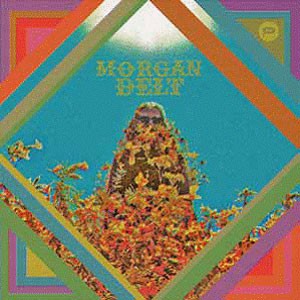 Morgan cites influences from Curt Boettcher to West Coast Pop Art Experimental Band and rounds it out with golden age Sunset Strip heavies like The Byrds and Love. It’s all in there; obsessively studied, mastered and then mutated. Side one opens with the one/two punch of ‘Make My Grey Brain Green’ and ‘Barbarian Kings’ blasting apart 40 years of pop-psych and stitching it back together in a way that is both familiar but also refreshingly new. ‘Beneath the Black and Purple’ soars with a chiming guitar grumble right out of "8 Miles High" & “Chakra Sharks” squirms it’s way out of the speakers like a snake - oiled up with the stink of not only what came before, but what’s happening NOW. The drums pound hard and heavy, while the backups “la-la-la” all over your noggin like a Frankenstein version of The Flaming Lips & Thee Oh Sees. Each track worms it’s way into your brain and takes hold.

The finale ‘Main Title Sequence’, is all Stu Phillips-worship, right out of the soundtrack to your favorite 60’s cult classic with it ’s angelic backing vocals and lilting tremolo lead but somehow still buzzes with a modern current. As Morgan so keenly described his notion on the current state of genre bending music “I think we’ve become unstuck in time and everything is going to happen all at once from now on.”