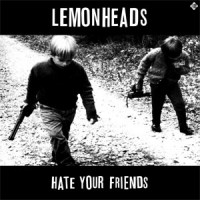 Hate Your Friends is the 1987 debut album by the Lemonheads, one of only three full-length releases to feature the original band line- up of Evan Dando, Ben Deily, and Jesse Peretz. The album showcases a hardcore-punk-to-pop-rock sound and sensibility as playfully fierce as it is surprising…especially to listeners who know the band only from their better-known major label recordings of the 1990s.

The roots of Hate Your Friends begin with the genesis of the band itself: when high school friends Ben Deily and Evan Dando—inspired by a shared love of the 70’s absurdist comedy troupe the Firesign Theatre, literature, and punk rock—began playing their own songs together in 1985. Dando and Deily first started out as a two-piece ensemble: swapping back and forth between a shared Guild guitar (and a crappy amp) and vocal mic, and pounding a drum kit “borrowed” from the high school jazz band. With the addition of classmate and friend Jesse Peretz on bass, the two-man outfit quickly became a power trio. With a handful of original songs, a passionate love for their favourite bands—from Husker-Du, the Replacements, Black Flag and the Germs, to the Saints, Wire and ‘77 UK punk—and a tiny recording budget, the Lemonheads set about their first studio session within days of their high school graduation in June of 1986.

During that summer, a significant amount of what would become the band’s debut album was recorded in Brookline, Massachusetts, with Deily and Dando sharing vocal, guitar and drumming duties. Above and beyond bass, Jesse proved pivotal as the band’s manager, booker and tireless promoter—helping arrange for the Lemonheads self-released debut EP, Laughing all the way to the cleaners, later that summer, and shortly thereafter helping establish the relationship with Curtis Casella of TAANG! records that paved the way to full-length LP Hate Your Friends. Finally, with the addition of full-time (and fairly short-lived) drummer Doug Trachten, the last songs of Hate Your Friends were recorded in the winter of 1986-7.

BONUS TRACKS: This Fire Records re-issue features bonus tracks including 12 never-before-released live tracks from a 1987 radio session, rare tracks from the early compilation Crawling From Within, and additional tracks not included on the original release of Hate Your Friends (“Buried Alive” and “Gotta Stop”).