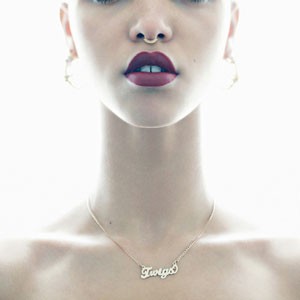 Finally back in print, the second FKA Twigs EP. Originally released September 2013 on Young Turks and fanning the flames of this. soon-to-be star.

Six years later it's lost none of its stop-you-dead-in-your-tracks, fragile beauty. As if suspended on a tightrope of otherworldly desires, tracks crumble beneath crushing beats as listeners precariously step into the unknown with each and every passage.

The smudged dreaminess flirts with the post-vapourwave fall-out, even skirting into benzo-rap before sticking two fingers up at the opiated, lackluster also-rans as they wallow in self pity whilst FKA rises like an angel from the ashes of a fractured society. Don't miss your chance to cop this second time round....

Matt says: Hold my hands up. Slept on this back in 2013 (think I was obsessed with a world of galloping techno and US house...); WHOOPS! Massive fail on my part. Sometimes our fertile soil truly gestates a truly unique musical life form. FKA Twigs is one such species and should be celebrated as a indigenous UK sonic landrace.