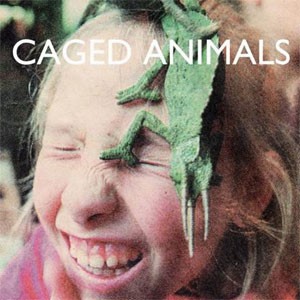 Caged Animals is Vincent Cacchione, a New Jersey-born Italian living in Brooklyn. Known previously for the nearly noir folk-rock of his former band, Soft Black, Cacchione carries a strong songwriting gene in his Caged Animals brand of glitch-friendly pop - as inspired by the classicism of Jeff Magnum or John Lennon's solo material, as the melancholic R&B twist of James Blake or Frank Ocean, or the perfect fusion of Chad Van Gaalen's raw & pop qualities.

In The Land Of Giants is a record about family, faith and hope and its’ recording became an opportunity to do everything that Cacchione does best in one audio space - marrying the sonic experimentation of his love for electronica with the undeniable penchant for lyrical and emotional resonance he developed in Soft Black, a band he formed with (Zachary) Cole Smith of DIIV.

This is an intimate yet grand Pop record from an artist that is not afraid of stirring emotions amidst a mountain of melody, and certainly not afraid to risk being seen as uncool in order to deliver something genuine. Cacchione himself states “This is the most spiritual record I've made. It necessitated a huge shift in my worldview and a concentrated effort to distill all of my strengths into a focused idea. For me, this album was about making something emotional, direct and human within the context of computer-made, electronic music. My previous recordings dealt heavily with some serious issues from my past. On 'In The Land Of Giants', I'm seeing the clouds part and trying to describe the beauty of my first view of the sky". How cool is that?