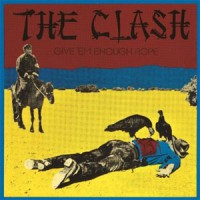 "For their second album, the Clash worked with the American hard rock producer Sandy Pearlman, best-known for his work with Blue Öyster Cult and the Dictators. The teaming was quite controversial within the punk community, and the sound of Give 'Em Enough Rope is considerably cleaner, yet the more direct sound hardly tamed the Clash. While the record doesn't burn with the same intense, amateurish energy of The Clash, it does have a big, forceful sound that is nearly as powerful. What keeps Give 'Em Enough Rope from being a classic is its slightly inconsistent material. Many of the songs are outright classics, particularly the first half of the record ("Safe European Home," "English Civil War," "Tommy Gun," "Julie's Been Working for the Drug Squad") and "Stay Free," but the group loses some momentum toward the end of the record. Even with such flaws, Give 'Em Enough Rope ranks as one of the strongest albums of the punk era. " - Allmusic.

Andy says: Initially perceived as a disappointment, simply because The Clash's debut was so inspiring. With hindsight, this is a really good Rock record, and therein lies people's disgruntlement: less Punk, more Rock, but this is a band that always pushed forwards.