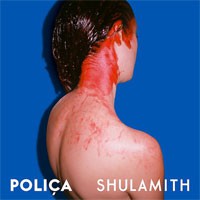 Poliça return with their second album ‘Shulamith’, the follow up to 2012’s universally acclaimed breakthrough debut ‘Give You The Ghost’.

Founded by vocalist Channy Leaneagh and producer Ryan Olson out of the ashes of Minneapolis collective Gayngs, and featuring Drew Christopherson and Ben Ivascu on drums and Chris Bierden on bass, Poliça’s ‘Give You The Ghost’ was released in April of 2012. Seemingly from nowhere it became one of 2012’s standout debut albums. The band made their UK live debut in June 2012, with two packed nights at the tiny Camp Basement in London, and less than a year later, March 2013 saw the band play a triumphant show to a sold out Shepherds Bush Empire.

From the flurry of warped metallic electronica and razorsharp groove of opener ‘Chain My Name’, with its stark and rushing refrain, the angular R&B-pop futurism of ‘I Need $’, its sweetly earworm hook belying lyrics of alternately helplessness and defiance, to the gliding, bird’s eye meditation of closer ‘So Leave’, ‘Shulamith’ reaffirms Poliça as one of the most fascinating and vital groups in forward-thinking pop.

Andy says: A lot of excitement around this unique band at the moment and they don't disappoint. Album number Two is even better than their debut and it's not often you can say that, is it? Mesmerising.

PoliçaGive You The Ghost (RSD22 EDITION)