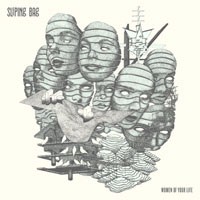 Stripped-down, unblighted, bedroom pop songs... about girls. "Women Of Your Life" is the intimately facile sophomore album from indie-slackers Sleeping Bag. The Bloomington, Indiana based trio is spearheaded by Dave Segedy, who is the group's drummer, songwriter and primary vocalist (that's right: a drummer who writes and sings all the songs!). Specializing in simple and honest songwriting, Malkmus-deadpan vocal delivery, and unusually addictive melodies, Sleeping Bag craft songs that are at once familiar and fresh. The band's debut s/t album was released on Joyful Noise in August 2011, receiving praise from Under The Radar, Impose Magazine, Village Voice, RCRD LBL, and My Old Kentucky Blog.

With their second album, the trio have matured in the ways one might expect: songs are a bit longer, lyrics a bit more personal, and arrangements more developed. But all of Sleeping Bag's signature elements are well represented throughout: the heartfelt ("In The Pocket", "Still Life"), the playful ("Allison Cole", "Saturday Night") and the unbelievably catchy ("Soccer Ball", "Walk Home"). Segedy's effortless melodies, accompanied by the distinctively jangling guitar work of Lewis Rogers and the tastefully minimal bass of David Woodruff, combine to form a sound that summons the energy and earnestness of 90s rock, while sidestepping throwback territory. Familiar influences are organically reconstructed into relevant,
captivating pop. These are instantly accessible songs which gain surprising depth with each obsessively repeated listen.