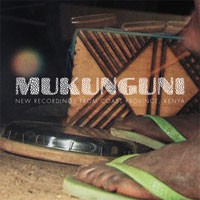 Field recordings of the Mijikenda tribes, made in different spots in and around Mukunguni village, coastal Kenya, throughout September 2011: mostly healing music (especially for mental problems), but also love-songs, and spiritual contributions to weddings and burials; mostly in the Sengenya style which evolved in the early twentieth century, adding pace, new Tsikitsi rhythms and extra drums to the traditional Dumbwi forms of the Duruma tribe.

Besides the Sengenya drums - bumbumbu, dahdahe, chapuro, vumi, ngoma - there are lungo and dena (metal rings), kayamba (raft rattle), njunga (bells), ukaya (metal tray), bamba (metal guiro) and bottle-tops. Our album opener is solo dena, played to sound like a bat and heal the village sick, with the ear for frequency and timbre of a stringent minimalist. There are the piercing, reeded nzumari oboe and bung'o horn, sounding like fierce free-jazz improvisation; and two gently stunning marimba solos, with complex, overlaid melodies and rhythms, played in polyphonic accents, almost like talking drums.

Most of the recordings here are songs, with strong tunes, robustly delivered, different solo voices leading the group - to heal; to chase away Pepo Mlume, the devil who poisons the imagination; to get you on your feet, dancing; to celebrate dowry payments and weddings; to bring the Mijikenda cultural inheritance to life. Matatizo - 'Worries' - was recorded spontaneously at a bus-stop, waiting for a ride: it's a Swahili love-song, with a plaintive female vocal performed to the accompaniment of five or so people rubbing their palms together in tight rhythmic patterns. 'The lord conferred this love on us, my sister. Is it human, or from the angels? Flowing out of binoculars... or computers? I can't figure it out, but my heart aches so badly.'

The vinyl set is two ten-inch records, plus the CD, in a gatefold sleeve. Besides photos, both formats contain the musicians' own introductory notes, snatches of translation, and brief track-by-track commentary.

Inga CopelandDon't Look Back, That's Not Where You're Going