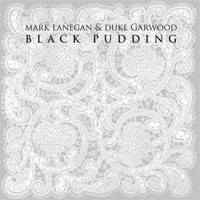 Mark Lanegan has teamed up with multi-instrumentalist Duke Garwood to release Black Pudding via Heavenly Recordings.

Lanegan, never one to shy away from unique collaborations, has previously worked with Isobel Campbell, Greg Dulli and as a member of The Screaming Trees, Queens of the Stone Age and Soulsavers. "Duke Garwood is one of my all time favorite artists," said Lanegan. "Working with him has been one of the best experiences of my recording life." Lanegan and Garwood met a few years ago while playing on the same bill and Garwood was a frequent opener on Lanegan's recent European tour.

Garwood has often been described in the press as Lanegan's "spiritual cousin across the Atlantic waters." He has been widely praised as a master bluesman, with The Quietus saying "The combination of Garwood's murmured vocals and the sound he gets out of his guitar - which ranges from a rolling, loose finger-picking to shuddering howls of feedback - has a hypnotic effect" and The Mirror dubbing him as "London's leading exponent of the wheezy broke-down blues."

Black Pudding was recorded at Pink Duck Studios in Burbank, California by Justin Smith (Tegan & Sara, The Hives) and mixed by his Queens of the Stone Age associate Alain Johannes.