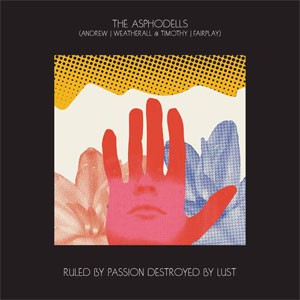 On this album Andrew Weatherall has partnered with Timothy J. Fairplay as The Asphodells. Their friendship goes back to Tim’s time with Battant in the latter part of the 2000s with Andrew helping out on production. Tim has been responsible for a number of independent tracks variously on Astro Lab Recordings, World Unknown, Bird Scarer, Emotional Response and Magic Feet. He has played live across Europe including at Fabric in London and Robert Johnson in Germany and DJs at regular Glasgow night Crimes of the Future with Scott Fraser.

Musically the album’s yet another game changer. Andrew has left behind the rock and roll leanings of Wrong Meeting and A Pox on the Pioneers and looks back over his shoulder to the purer electronics of the Kraftwerk-inflected Two Lone Swordsmen but without the sparse introspection that characterised those times. Now the music is saturated in repetitive beats overlaid with sinuous melodies played out over whole tracks. Songs still feature but sound haunted, guitars still ground the tracks but are more resonant. John Betjeman’s ‘Late Flowering Lust’ sits surprisingly comfortably alongside AR Kane’s ‘A Love from Outer Space’ but ultimately it’s Weatherall and Fairplay that imbue the album with it’s own sense of a journey through a time and space that only dimly reflects our own.