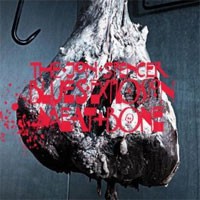 Meat And Bone is the first studio album by The Jon Spencer Blues Explosion in eight years. This is straight-up, Grade A Blues Explosion, mixed by Mr. Spencer himself, with no special guests. Meat And Bone is 12 prime cuts of raw rock 'n' roll, recorded on Sly Stone's "Riot" Flickinger console at the legendary Key Club Recording Studio in Benton Harbor, MI, and mixed in the jungles of New York City. Judah Bauer, Russell Simins and Jon Spencer continue to blow minds with their fusillade of energy and rhythm, and have once again proven that the Blues is #1!

Says Jon Spencer: "We still have that psychic glue that allows us to create music together. Over the course of a year touring and writing new songs and recording, we rediscovered our shared history as a band. We circled the wagons, and went back to our roots. In a way this is almost like another first album."

On stage and in the studio, Judah Bauer, Russell Simins and Jon Spencer have destroyed and rebuilt American roots music with such ferocity and wild abandon. Make no mistake: The Blues Explosion was there first. They are the original. It was their sanctified outbursts and blues-bending riffs that began the new-fangled roots rock revolution and spawned countless imitators. The Jon Spencer Blues Explosion has blazed a furious trail into the future with incendiary spirit built from courage, audacity, and revolt. Nothing has been the same since.