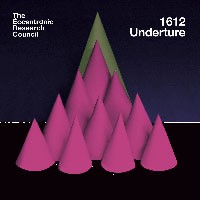 The collaborative reactions of Adrian Flannagan (Kings Have Long Arms), actress Maxine Peake (Shameless / Silk) and Dean Hohner (I Monster) - under the umbrella moniker The Eccentronic Research Council - take their collective experiences in theatre, music technology, television, pop cultural archiving and radio to reimagine a time and place, barren of authority and religious faith, where the unified working classes and alternative thinkers are mocked and persecuted at the hands of a flawed and paranoid government and monarchy.

As The Eccentronic Research Council recognise, “Socially and politically things haven’t changed so much in 400 years, people are poor again and have to do bad things too eat, individuals who don't fit in are still beaten down with bats, and there are hypothetical witch hunts all around us.”
Stylistically, The ERC opt for a vast array of mechanical music machines and synthesised effects to create this conceptual non-populist pop using analogue and acoustic equipment alongside tape manipulation, vocalisations and spoken word, remaining faithful to a pre-digital and unpredictable era taking cues from Mort Garson, Suzanne Ciani, Sorel Hayes, Joe Meek, Daphne Oram, JP Massiera and Delia Derbyshire amongst others.

Conceived with the same ambitions and goals as an electronic Smithsonian Folkways record, ‘1612 Underture’ is a concept album that aims to reevaluate and positively recontextualise an important historical and cultural feminine incident, but also hopes to encourage listeners to rethink how they process modern folk and popular music 400 years after the events in the eye of this project’s unique subject matter.

Released to coincide with the 400th anniversary of the Pendle Witch Trials, which should bring with it plenty of fanfare and live events. Check out this YouTube video: http://www.youtube.com/watch?v=Dxh6LrwET0U