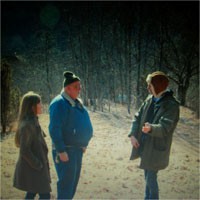 On Dirty Projectors sixth album, 'Swing Lo Magellan', songwriter and leader David Longstreth shows he really doesn't know how to do the same thing twice. Where prior Dirty Projectors albums investigated 20th-century orchestration, West-African guitar music and complex contrapuntal techniques in human voices, 'Swing Lo Magellan' is a leap forward again. It's an album of songs, an album of songwriting. 'Swing Lo Magella'n has both the handmade intimacy of a love letter and the widescreen grandeur of a blockbuster, and if that sounds like a paradox -- it's because it was until now.

1. Offspring Are Blank
2. About To Die
3. Gun Has No Trigger
4. Swing Lo Magellan
5. Just From Chevron
6. Dance For You
7. Maybe That Was It
8. Impregnable Question
9. See What She Seeing
10. The Socialites
11. Unto Caesar
12. Irresponsible Tune